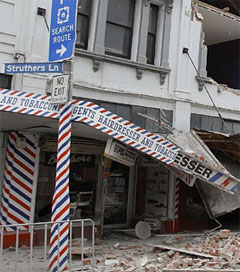 For the past five months a magnitude 7 earthquake, centred near Wellington, has been slowly rocking the country. It’s the strongest earthquake to hit the region in 150 years says The New Zealand Herald, “but none of the locals are diving under desks or sheltering in doorways.” In a normal earthquake, the Earth lurches, releasing in some cases multiple atomic bombs-worth of energy in seconds. The shaking and rolling felt at the surface makes buildings tumble and gas lines rupture – an unpredictable disaster that seems to strike out of nowhere. But the Wellington earthquake is different. What’s happening near Wellington is that that same amount of energy, and the same amount of movement of the Earth’s surface, is being spread out over months and months. It’s still a magnitude 7 earthquake, it’s just a gradual one. Wellington’s residents aren’t in a panic, says GeoNet, because the Wellington quake is a strange type of earthquake known as a “slow slip earthquake,” a style of tremblor that scientists only really discovered over the past decade. Unlike earthquakes, which seem to occur almost at random, slow slip earthquakes can be recurrent. What we don’t really know, unfortunately, is how they’re related to the faster, more dangerous breed of earthquakes. But by studying them scientists hope we might be able to get a better grasp on the forces behind the killer quakes, and maybe one day let us predict the next Christchurch.