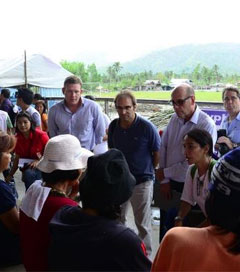 Since the 1960s, some 150,000 people have died and more than three million have been displaced on Mindanao Island (Philippines); the result of a bloody conflict between Muslim rebels and government forces. Now, after decades of conflict, Mindanao is at peace. New Zealand is helping Mindanao rebuild, via the Mindanao Trust Fund (MTF), writes the Manila Post. The MTF has received a $5.25 million grant, part-funded by New Zealand, from the World Bank. The grant will give 65 villages funds for agricultural small business projects. So far, the MTF has completed 240 reconstruction projects. The Office of the Presidential Advisor on the Peace Process said, “we welcome the additional support that adds to the government’s efforts to empower conflict-vulnerable communities in their quest for a peaceful and progressive life.’ New Zealand has also partnered with the Food and Agriculture Organisation (FAO) fund tools, seeds, and fertiliser, as well as basic agricultural skills training, for 14 Mindanao villages. Elsewhere Reuben Levermore, New Zealand’s Ambassador to the Philippines, blogs that ‘this is one way our nation- itself built on agriculture –can help make a difference.’