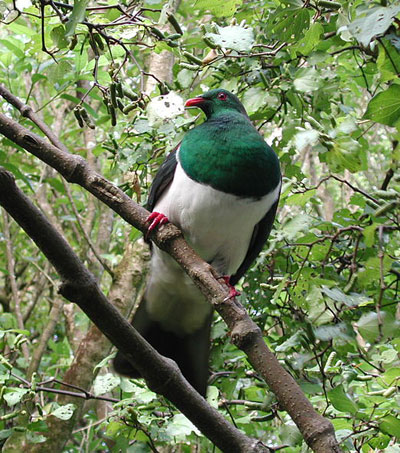 New Zealand Bird of the Year

The Kererū – “a native green and bronze wood pigeon with a taste for fermented fruit has been named the 2019 bird of the year in New Zealand” in a poll organised by Forest and Bird, writes Eleanor Ainge Roy in an article for The Guardian. The kākāpō came second and the Kakī or black stilt came third.

“The Kererū is endemic to the country… Although quiet and reclusive by nature, Kereru has earned a reputation as the drunkest bird in New Zealand, and have been known to fall from trees after consuming rotting fruit left lying on the ground.”

“Described by conservation group Forest and Bird as “clumsy, drunk, gluttonous and glamorous,” the Kererū population is not endangered, but is vulnerable to attacks by predators,” reports the article.

“Kererū play a vital role in dispersing the seeds of native New Zealand species such as karaka, miro, tawa and taraire across large areas, because they are one of the few birds large enough to swallow the fruit whole.”

“The Kererū is one of our most recognisable birds, it is often heard before it is seen,” Forest & Bird’s Megan Hubscher told Radio NZ.

“It is one of our few birds that is doing OK. Only one in five of New Zealand’s native birds are increasing in number or stable, 80% are decreasing. But the Kererū is doing pretty well.”