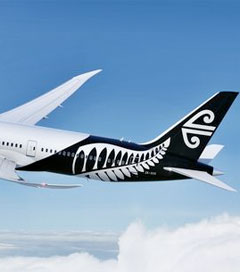 Air New Zealand has unveiled a new livery for its aircraft, which will feature an iconic silver fern, to adorn its entire fleet by the end of 2014. The new look will phase out Air New Zealand’s teal blue colours in favour of a mostly black and white scheme. The carrier’s traditional “koru” design will remain on the tail, though it will shift to a white-on-black design. “The new-look is distinctive and iconic and we believe will inspire a sense of pride in New Zealanders,” Air New Zealand CEO Christopher Luxon said in a statement. The livery design process involved extensive consumer testing including focus groups both in New Zealand and outside the country. Air New Zealand said: “a clear preference was established for the New Zealand Way Fern Mark to be incorporated into the design with 78 per cent of those surveyed believing it fits with the Air New Zealand brand and represented New Zealand.” The Star Alliance carrier will begin repainting all 103 of its aircraft in the new design throughout the year, with all jets expected to have the new look by the end of next year. Air New Zealand said the majority of its fleet will eventually feature the white version of the new livery and a limited number will feature the black version. The New Zealand Herald reported that Air New Zealand’s “first Boeing 787-9 Dreamliner, due for delivery next year,” will be painted in the black version.