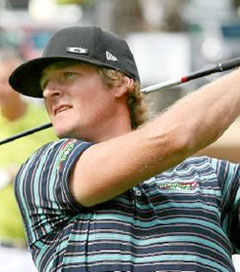 Move to the Sunshine Has Rejuvenated Golfer

Queensland Sunshine Tour Order of Merit winner Hamilton-born Jim Cusdin, 28, credits a move to Maroochydore on the Sunshine Coast for revitalising his golf career. It was somewhat of a risk he says, but ultimately proved a rejuvenating experience.

Cusdin won at Middlemount and Casino this season, but perhaps more significantly claimed 18 top-10 results to secure his spot atop the tour standings, 59 points ahead of Brisbane’s Henry Epstein.

The result has secured Cusdin a healthy bonus that will allow him to press his claims in Asia next year.

He will attempt to break through at the Asia Tour qualifying school or get on to the OneAsia Tour as a stepping stone to his eventual goal of playing on the lucrative European PGA Tour.

“I had played a couple of tournaments here last year in the middle of winter and it was about 23 degrees and absolutely magical and I was like, ‘I’m moving here’, so I basically just made up my mind and I just did it,” he said.