NZEDGE  >  News  >  Society  >  Mountain Peaks to Be Named in Their Honour 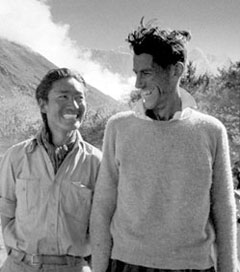 Mountain Peaks to Be Named in Their Honour

Nepal is set to name two Himalayan peaks after New Zealander Sir Edmund Hillary and Sherpa Tenzing Norgay, the men who were the first to reach the top of the world’s highest mountain on 29 May 1953 as part of a British expedition.

A government panel has now recommended that two unnamed mountains be called Hillary Peak and Tenzing Peak “to honour their contribution to mountaineering in Nepal”, Ang Tshering Sherpa, a former president of the Nepal Mountaineering Association, said.

The two peaks – Hillary’s at 7681m and Tenzing’s at 7916m – have never been climbed and are among a batch of new summits expected to be opened to foreigners next spring. Officials hope the peaks will attract more climbers and help boost tourism in Nepal, home to eight of the world’s 14 highest mountains.

A small airport which Hillary built in the 1960s at Lukla, the gateway to Everest, has already been named after the mountaineer and Tenzing. Besides conservation work, Hillary helped build schools, hospitals, water supply schemes and trails in the region.