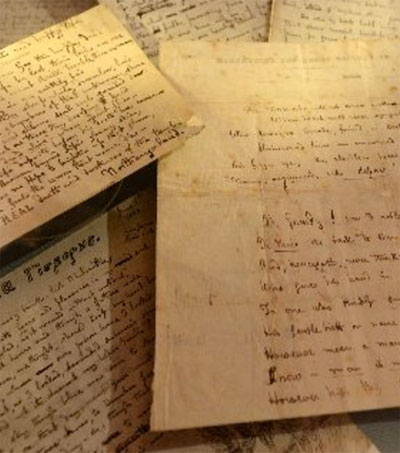 The first Brontë manuscript identified in New Zealand has been restored to its place in literary history thanks to university researchers. The fragment of Branwell Brontë’s work was misfiled as a letter in the Heritage Collections of the Dunedin Public Library, the Yorkshire Post reports.

Coincidentally, the announcement of the previously unknown handwritten manuscript occurred in the same year as the bicentenary of the writer’s birth. Branwell Brontë was born on 26 June 1817, and conferences and a special exhibition devoted to his life and work were held in the UK last year.

The lesser-known brother of the famous novelists Charlotte, Anne and Emily, Branwell is today remembered for his tragic, alcohol-related death and for painting the only group portrait of his novelist sisters. But he was also the first Brontë sibling to see his work in print, writing poems for British newspapers including the Halifax Guardian, the Bradford Herald and the Leeds Intelligencer.

Dr Thomas McLean, of the University of Otago Department of English and Linguistics, and Dr Grace Moore, of the University of Melbourne’s ARC Centre of Excellence for the History of Emotions, researched Branwell’s life and work so they could properly explain the significance of the manuscript.

They discovered the Dunedin fragment provides the ending for a story written by Branwell in 1837. The pair pieced together Branwell’s microscopic handwriting, sometimes word-by-word, sometimes letter-by-letter, and were able to place the fragment at the end of a scene in an inn, identified as part IV (i) of Angria and the Angrians.

McLean visited the Brontë Parsonage Museum in Haworth, near Keighley, in August last year and examined Branwell’s writing journal from which the page was taken. He said: “I could see exactly where our page fit. The fragment provides the finishing touches to the story.”