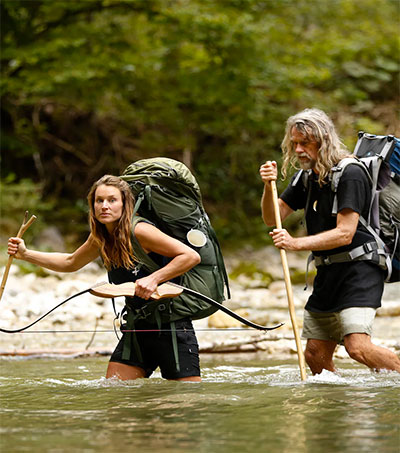 Miriam and Peter Lancewood Living Off the Grid

For seven years, Dutch woman Miriam Lancewood and her New Zealand-born husband Peter have lived a nomadic life – she is the hunter and he is the cook. Five years into a nomadic life in New Zealand, Miriam decided to write a book, called Woman in the Wilderness about her experiences living off the grid in the wild. Now the couple are walking across Europe to Turkey, with a tent and little else.

“And so bored,” she says. “And depressed about thinking I’m going to do this forever and ever.” She’s learned so much since she’s been out here but one question remains unanswered: “Where are all the women?”

When they do bump into another person in the wild it’s usually a hunter, and always a man. She thinks that perhaps women have lost their connection with nature, “even more than men. And also,” she adds, passionately, “why do women behave so weakly, physically? As in, ‘I can’t lift that,’ ‘I can’t shit outside,’ ‘I can’t have my period in the bush.’” She thinks it’s a shame women are missing out.

If you’re going off grid, prepping is key. Miriam and Peter spent months training for that first winter in Marlborough: long, demanding treks, first-aid courses; reading survival and foraging books – working out by the spoonful exactly how much flour, pulses, tea bags they’d need. They practised seeing in the dark with night walks. Lancewood isn’t a conspiracy theorist but she’s proud she has now learned survival skills, in case of Armageddon.

Peter thinks that everyone’s too obsessed with security, to the point where it interferes with their ability to think logically, or find happiness: “People say to us we’re living their dream, and I say to them, ‘Do it.’ But they say, ‘Oh, I can’t,’ and I say, ‘What do you mean can’t? Of course you can.’ And they look a bit confused by that statement – because it’s true.” Maybe, I say, it’s because they’d prefer a more temporary break with society: once you’ve opted out of your career, sold all your stuff – there’s no return.

“And that,” he says, with satisfaction, “is exactly the point.” Miriam nods in agreement. “Because once you’ve cut with your boring, unhappy life, I can guarantee that you’ll never want to go back.”

Tags: Guardian (The)  Miriam and Peter Lancewood  Woman in the Wilderness