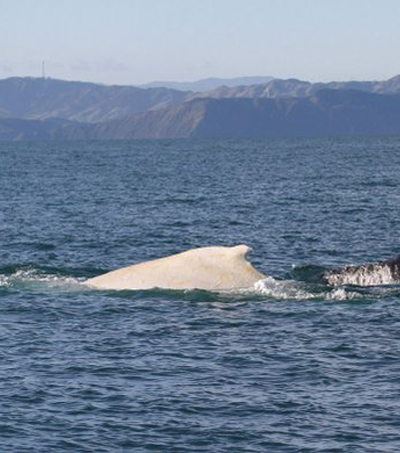 The world’s most famous white whale Migaloo – a pure white humpback – has been sighted between the North and South Island of New Zealand.

“Migaloo being in New Zealand waters supports the findings from our Cook Strait research that humpbacks seen off eastern Australia also move through our waters and perhaps even more so than we had thought”, said Nadine Bott, from New Zealand’s Department of Conservation.

“Confirming it is Migaloo helps us in learning more about humpbacks in South Pacific waters.”

Migaloo was first discovered in Australian Waters in 1991 and has been sighted regularly along the country’s eastern coastline since then.

Last year in July he was spotted in New Zealand’s Cook Strait.

The famous white whale, whose name ‘Migaloo’ comes from the Aboriginal words for “White Fellow” has also had a children’s book written in his honour.