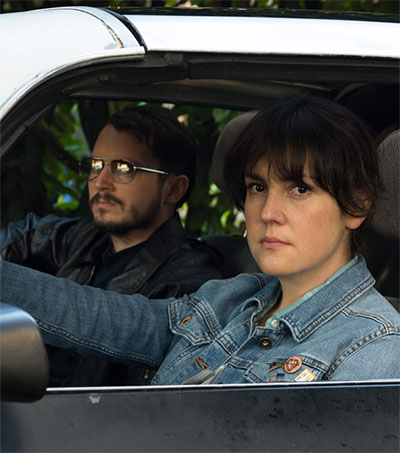 “Macon Blair’s I Don’t Feel at Home in This World Anymore follows a woman [called Ruth] (Lynskey) who has reached that breaking point, and it’s fascinating to watch her find her inner strength emerge as he indulges her misanthropy,” Goldberg writes.

“Ruth is deeply unhappy in her life, and reaches a tipping point when her home is robbed. She reaches out to her oddball neighbour Tony (Wood) for help in tracking down her lost stuff after the police prove ineffective. As Ruth begins to step up and fight her own battles, her sense of empowerment leads her down the path of vigilantism, which ultimately finds her to running into the burglar and his crew.”

“At times, Ruth and Tony’s escapades feel endearing, especially when you have such strong performances from Lynskey and Wood. Lynskey remains one of the best actresses working today, able to imbue her characters with both a tangible sadness and surprise humour. Her characters never come off as contrived, but rather they feel lived-in, and her grounded performance is essential to Ruth’s quixotic quest and companion. Wood gets the more colourful character, but he never chews the scenery or tries to steal the spotlight. He understands the balance the picture requires, and adds a lot of humanity to Tony.”

“When it keeps the focus on Ruth and Tony, I Don’t Feel at Home in This World Anymore is a satisfying story of two people who have decided that the only way to behave in a mad world is to be a little mad. It’s charmingly bizarre and it’s a joy to watch Lynskey and Wood at work.”

Lynskey stars in another Sundance film, XX, a horror anthology. The film will be released in the US on 17 February.

She lives in Los Angeles.