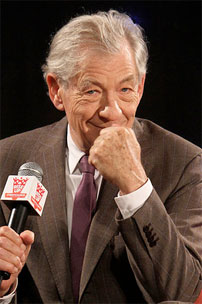 “For the past decade he has been best known as the X-Men antihero Magneto or The Lord of the Rings wizard Gandalf, but in more than a dozen sold-out performances in New Zealand, where he was shooting The Hobbit, Ian McKellen, 73, has played himself,” The Wall Street Journal’s Rebecca Howard writes. Ian McKellen on Stage: With Shakespeare, Tolkien and You raised $315,000 for the earthquake-damaged Isaac Theatre Royal in Christchurch. “‘It is a show I will never do again,’ McKellen said. ‘It is absolutely for New Zealand. It is absolutely for Christchurch and for the people who wanted to come along. I don’t think it would migrate very well. I like that. I think people have sensed that this is really for us.’”