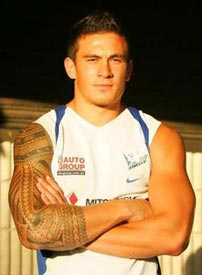 Sonny Bill Williams is a jack-of-all-trades when it comes to sports. “SBW,” who has played in both Australia and France, turned down big money offers from other teams to join the New Zealand Rugby Union. Off the field, he’s been able to pursue another passion — boxing. A recent profile in The New York Times showed rock-solid SBW’s drive and enthusiasm for both sports. SBW said, “Sometimes, finishing rugby training or having a bruised arm or niggling injuries, you’re a bit sore to do boxing. But you’ve got to manage yourself and do different things to keep the body moving or keep the hand-eye coordination going. It’s been a real juggling act. I’ve always tried to push the sporting boundaries and push my limits. You’re only young once, so why not have a go?” Fans of the star rugby player shouldn’t worry, he’s not giving up the sport that made him famous. In fact, boxing has been an added complement to his rugby playing. “Because I’ve been doing rugby or rugby league since I was 17, boxing kind of motivates me and gets me up, and I feel that I need it to carry on in the sport. It’s definitely something I want to continue in the future.”