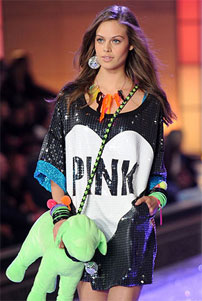 Palmerston North model Jessica Clarke, 18, is the first New Zealander to feature in a Victoria’s Secret show, which was held at New York’s Lexington Avenue Armory on 10 November. Father, Shaun Clarke said: “I think she sort of realises it’s a bit of a fantasy; she couldn’t imagine anything more fantastic. She realises she’s living a dream.” Clarke said he did not realise at first the enormity of what being chosen for the show meant for his daughter. Thirty-six women were chosen for this year’s event and only some 150 had modelled for Victoria’s Secret since the show began in the mid-1990s. Clarke is signed with Clyne Model Management. She won Miss Teen Manawatu in 2009.