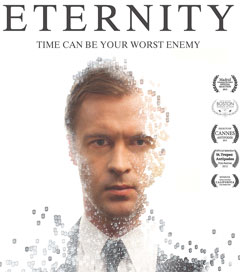 New Zealand filmmaker Alex Galvin’s feature film Eternity has won two awards at the Madrid International Film Festival. Eternity won best editing, alongside Nick Swinglehurst and best supporting actor for Wellington actor Ralph Johnson. “I couldn’t be happier for Ralph Johnson, I regard him as one of New Zealand’s finest actors and he was absolutely superb in the role of Sherlock; he owned that role,” Galvin said. “For me these awards are all the more satisfying because all the other feature film winners were multi-million dollar productions.” The low-budget film is set in both Hong Kong and New Zealand and is the first official film collaboration between the two countries. It follows the life of Elliot Travers, a police detective who is placed into a computer game and has to solve the most difficult case of his career in order to escape. Eternity, also won the Special Jury Prize at the California Film Awards. It is Galvin’s second feature, following his 2007 debut When Night Falls, which was shot in ten days. Galvin, 37, is a trained opera singer.