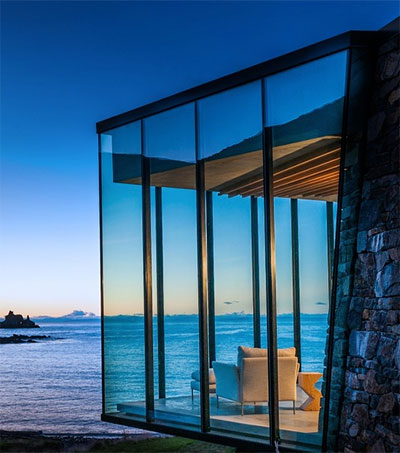 “Once seen by many as a destination for backpackers to hike, bike and bungee jump, New Zealand’s profile is changing,” Mark Jones writes in a Financial Times feature. “In 2014 the national tourist board developed a ‘premium sector strategy’ that would appeal to the world’s wealthiest 40-60 year olds. It hoped to capitalise on a perceived rejection of ostentatious luxury in favour of privacy, authenticity and natural environments.

“Already it has paid dividends: the members of Luxury Lodges of New Zealand saw revenues rise 22 per cent for the six months to September 2015 compared to the previous year. And rather than simply visiting one upmarket lodge, they are increasingly indulging in what is – genuinely – becoming known as ‘lodge-hopping’. You can hop, as I did, on internal flights and into rental cars. You can hop on ferries. Or – if you’re really not scrimping – you can hop from lodge to lodge on a helicopter; they all have helipads.

“Annandale, a coastal farm [on Banks Peninsula] is home to some of the association’s most dramatic accommodation. Four separate, private, houses are scattered across a 4000 acre farm, each offering a distinct architectural style and what the owners call ‘gumboot luxury’. They range from the five-bedroom Homestead, a handsome colonial-style farmhouse built in the 1880s to Seascape (pictured), a dramatic glass-walled retreat just for two. Surrounded by hills and facing the sea, Scrubby Bay is a relaxed and secluded beach house, ideal for gatherings of up to 14, complete with swimming pool and outdoor hot tub. Annandale’s marketing slogan is as simple as it is compelling: ‘Stay where the world can’t find you’.

“Within the lodges’ association there’s a select group of ‘super lodges’ (of which Cape Kidnappers is also one), with more privacy, a bigger room, more daring architecture and higher thread count on your sheets. But I’d still recommend trying the full range; and don’t forget the real luxuries the lodges offer – the tramps, the wildlife, the heartbreaking views – are open to everyone.”