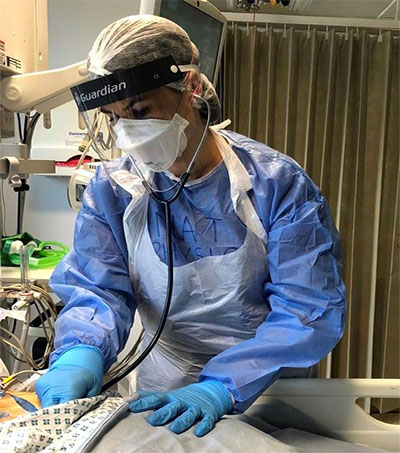 Clinical lead physiotherapist for critical care at St Bartholomew’s Hospital, New Zealander Natalie Scott, has received the Freedom of the City of London – a recognition awarded to people who have achieved success, recognition or celebrity in their chosen field – for her work during the city’s COVID-19 pandemic response. Mike Dinsdale reports for The Northern Advocate.

Scott told Dinsdale that she was honoured and humbled to receive the accolade and never thought she’d be mentioned in the same sentence as such esteemed and influential people.

The award was bestowed by The Right Honourable The Lord Mayor of London Alderman William Russell on behalf of the City of London via the internet.

In his letter to Scott, who is now officially known as Free Sister, Lord Mayor Russell said: “We have heard from the senior team at St Barts about how critical your work has been during this incredibly challenging period. We hope that you will agree to accept the Freedom as an acknowledgement of the City of London’s appreciation for your own contribution, but also as a symbol of our gratitude and respect for all your colleagues at St Barts and for key workers throughout the NHS.”