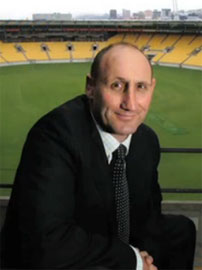 Former All Blacks captain and New Zealand Rugby Union chairman Christchurch-born Jock Hobbs, has died of cancer in Wellington, aged 52. Hobbs played 21 Tests for the All Blacks as an openside flanker between 1983 and 1986, four as captain. After retiring from rugby at 26, he devoted his energies to his family and legal career before emerging as arguably the most important New Zealand rugby administrator of his generation. Hobbs was a fresh-faced New Zealand Rugby Union (NZRU) councillor in 1995 when he fronted as a central, unifying figure to defuse a potentially explosive rift between the players and the NZRU when rugby went professional. He was made board chairman in 2002 to rebuild the NZRU’s reputation and he was able to successfully lead New Zealand’s bid for the 2011 Rugby World Cup. The All Blacks website posted a statement: “We’ve lost a very dear friend, a rugby great and an incredible New Zealander.” Current NZRU chairman Mike Eagle said it was with a heavy heart that Hobbs’ passing was acknowledged. “New Zealand has lost an inspirational leader with an incredible passion for the game of rugby and the part it plays in our lives.” At his funeral, Hobbs’ friend Rob Morrison said he did not lose his battle with cancer, but his death was the end of a life spent winning. “As he leaves this field today we know he gave it everything. He was a winner.”