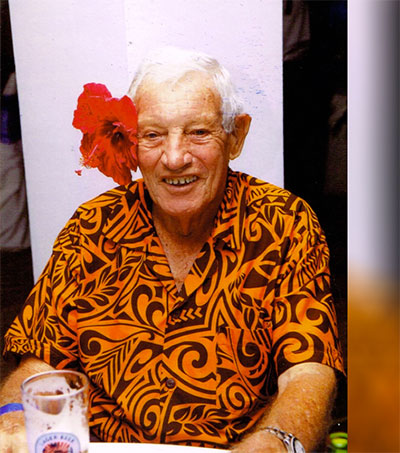 If you’re driving around Apia gazing at the many, multi-storeyed government and company buildings, chances are you’re looking at some of the work of well-known, local identity, Motueka-born Robert (Bob) Arthur Garner, who has died aged 86 in the home he built in Ululoloa.

Over the 43 years – half of his lifetime, during which the builder made Samoa his home with his wife Mele, many of these substantial buildings which make an imprint on the skyline, were supervised by this man.

Moore first came to Samoa as an aid adviser for the New Zealand High Commission in 1974.

In the early 1980s he and his wife Mele moved to Tonga – the day before the P.S.C. strike, Mele remembers, and they were there for just over two years overseeing buildings funded by New Zealand including rebuilding homes after a cyclone.

Recalling his body of work, “It’s easier to start from one end of town,” Mele said.

“There’s the Samoa Ports Authority building; the Customs and Quarantine buildings; Pacific Forum Line across the road then heading into town, the Central Bank of Samoa, the multi-storeyed Accident Compensation Corporation headquarters; the National Provident Fund Plaza, the Samoa Land Corporation Hotel at Malifa and the Bluesky building at Maluafou.”

Small in stature, but huge on work ethics, Moore could be described as feisty, with exacting standards and woe betide anybody who wanted to take shortcuts.

And although in his later years, he could no longer play golf or indulge in his love of ballroom dancing as he had earlier in his life, he continued his love of reading and still took a keen interest in local affairs through daily reading of the Samoa Observer.

“He enjoyed living in Samoa and enjoyed the Samoan culture.”