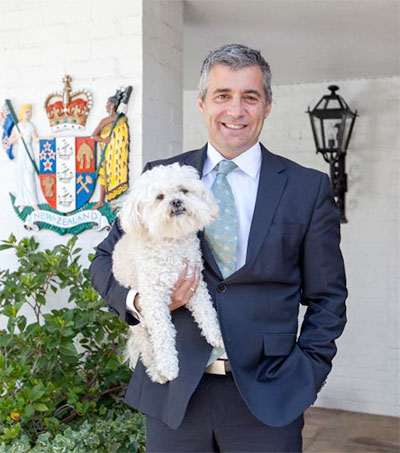 “The eight-year-old, named after Tintin’s companion, has accompanied the Grice’s through Leon’s stints as executive of a software company and director of the New Zealand 2011 Rugby World Cup. ‘He’s not as intrepid as Tintin’s dog,’ Grice says. Since crossing the Pacific three years ago, Milou’s greatest adventures have taken place within the bounds of the consul’s residence in the Brentwood Hills.

“There are approximately 22,000 New Zealanders in southern California but the consular duties are slight … Grice has been encouraged to approach his job more broadly than his predecessors in Los Angeles. ‘The government felt we could do more with an economic focus,’ he says. ‘My brief was to bring a different kind of energy to our presence here.’

“Grice works on supply-chain issues linking New Zealand wine to the market and in 2013 he used the America’s Cup yacht race in San Francisco to illustrate the country’s prowess in non-agricultural sectors. ‘Almost every boat was operating with New Zealand hardware and science,’ he says. ‘We were able to showcase New Zealand know-how without having to say, “We’re smart”.’

“Although not very diplomatic, [Milou’s] specific enthusiasms dos serve as a useful trade-promotion exercise for a country eager to expand its dairy exports to the United States. ‘If someone has cheese,’ Grice says, ‘he’ll stare at them until they relent.’”