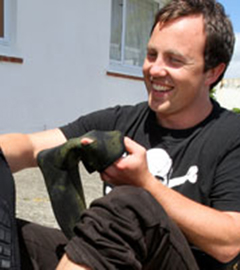 A medical degree and a typical ‘South Island’ kiwi attitude has come in handy for one New Zealand doctor who fought off an attacking shark with a knife and stitched his own wounds before heading in for a well-earned beer at the local pub.

James Grant, 24, was spearfishing at Cosy Nook near Invercargill when he felt the shark latch onto his leg. Originally thinking it was a diving buddy pranking him, Grant responded calmly, telling Radio New Zealand that when he realised it was a shark his first thought was “bugger, now I have to try and get this thing off my leg.”

“I sort of just fought the shark off. The shark got a few stabs. The knife wasn’t long enough though,” he later told Fairfax Media.

Fortunately Dr Grant was wearing a seven-millimetre thick wetsuit, and still had his spear dagger out to dispatch the flapping fish which most likely attracted the shark in the first place.

Grant said he didn’t get a good look at the shark but the nature of several wounds suggested it was a Sevengill shark and about 20 centimetres across at the jaw. Full-grown Sevengills can measure up to 3m in length.

After getting rid of the shark, Grant swam ashore and stitched his cuts using a first aid kit he kept in his vehicle for when his pig-hunting dogs were injured.

He and his friends then abandoned their fishing expedition and went to a nearby tavern where he was given a beer for what the pub co-owner Warren Bevin called “the best anaesthetic you can get”, and a bandage for the wound to stop blood dripping on the floor.

“It would have been great if I had killed it because there was a fishing competition on at the Colac Bay Tavern,” Grant said.

In recorded history there has never been a fatal attack by a sevengill shark, although one did reportedly grab a diver by the head in 2013.