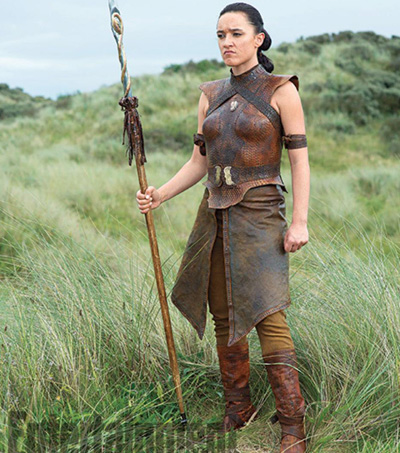 New Zealand actress Keisha Castle-Hughes “made a memorable debut on Sunday’s episode of Game of Thrones – The Sons of the Harpy, according to the New York Times blog ArtsBeat.

Castle-Hughes’ character Obara Sand and her sisters, known as The Sand Snakes, arrived on the show to avenge last season’s killing of their father, Oberyn Martell, the Dornish prince played by Pedro Pascal.

The Kiwi actress had her mind set on a role since reading the George R.R. Martin books that inspired the series and seeing Oberyn on the show.

Castle-Hughes was trained in Wushu martial arts and coordinated weapon fighting on set to be able to depict Obara’s ‘warrior monk’ ethos.

”Of all of the Sand Snakes, she’s the most warrior-like and the least feminine. She was described as a warrior monk. She meditates and kills in equal measure, which seems absolutely bizarre”, said the Kiwi actress about her character.

In her memorable debut her character Obara Sand flung her signature weapon – an elaborately crafted spear, through a buried man’s head.

“Losing (her father) has affected her deeply but she’s not a very emotional person,” Ms. Hughes said. “So she shows it in other ways, such as throwing spears through poor merchant captains’s heads.”

Keisha Castle-Hughes was nominated for a best actress Oscar for Whale Rider in 2003, which made her the youngest person ever nominated for the award. She has since then starred in Star Wars Episode III: Revenge of the Sith, The Nativity Story and The Walking Dead.