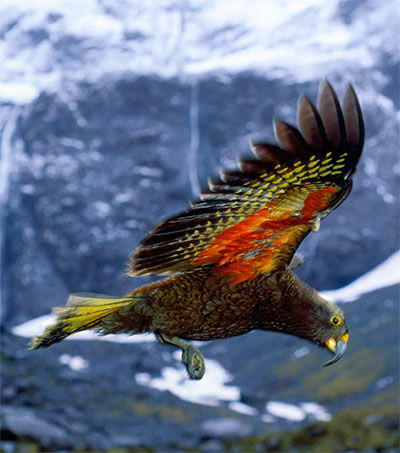 Kea Soars to Bird of the Year Victory

The kea, the world’s only alpine parrot, has been crowned New Zealand Bird of the Year, beating the kereru and the kakapo with thousands more votes cast for the species than there are surviving individuals.

New Zealand’s annual Bird of the Year competition hit new heights this year with more than 50,000 votes cast from around the country and the world. The competition is in its 13th year, and pits the country’s rare and endangered birds against one another. No bird has won twice.

The kea – a highly intelligent and inquisitive olive green mountain parrot that lives only in the Southern Alps – received 7311 votes, streets ahead of the native wood pigeon, the kereru, which came second with 4572 votes, followed by the kakapo with 2554 votes.

Kea are found only in the mountains of the South Island in a vast habitat of some 3.5m hectares. They once numbered in the hundreds of thousands but are now classified as nationally endangered with between 3000 and 7000 birds remaining.

Tamsin Orr-Walker, the co-founder of the Kea Conservation Trust, said it was “fabulous” the kea had finally won and in many ways it was more representative of New Zealanders than the official national bird, the reclusive kiwi.

“A lot of people are saying the kea should be our national bird because they so much epitomise what it is to be a New Zealander: adventurous and up for a challenge and maybe a bit misunderstood,” Orr-Walker said.

Despite their protected status, kea have divided New Zealanders between those who enjoy the cheeky parrot’s animated nature and those who curse its destructive habits such as damaging cars, tents and buildings in alpine environments, attacking stock and habitually stealing food.