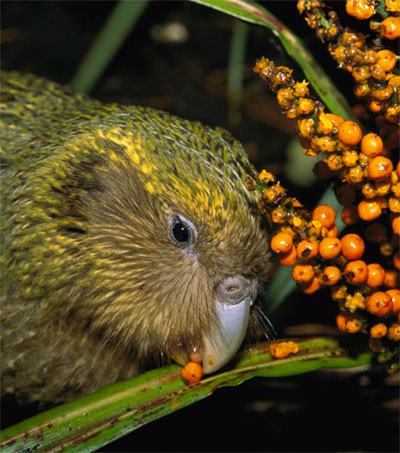 Kakapo May Need Parasites to Survive

Conservation biologists are doing everything they can to keep the critically endangered kakapo from vanishing. And so, when they discovered a few years ago that a pair of captive kakapo were infected with tapeworms, they did the obvious thing. They dewormed the birds. Hamish Spencer, a geneticist at the University of Otago thinks that was unwise. The New York Times looks at the pros of parasites.

If endangered species are going to escape extinction, Spencer argues, they may need parasites to survive. “Some of these parasites may turn out to be quite good for their hosts,” he says.

In the wild, a species may regain the old relationship with its parasites. But aggressive human intervention may also forever sever some links between hosts and parasites.

“It turns out that if you look at organisms, you discover that a surprising number of them have parasites that only occur on that species or perhaps that species and a couple of close relatives, and that’s it,” Spencer says.

Treating captive animals for infections may help hasten these parasites into oblivion and, with them, the mechanism the endangered species needed to fine-tune its immune system.

Spencer suspects we have wiped out other parasites without realising it. No one knows what species of tapeworm was infecting the kakapo, but deworming them may have driven it extinct.

It’s possible, Spencer says, that the lack of parasites may help explain why some species restoration projects have been disappointing. “There are a number of cases where reintroduced populations haven’t done very well,” he said. “It might be that their immune systems are not very good.”

A first step, Spencer says, would be to stop medicating captive animals so freely. “We are arguing against the idea that you just dose the hell out of everything before you put animals back in the wild.”

There are 123 kakapos in existence. Every known living kakapo, except some young chicks, has been given a name by Kakapo Recovery Programme officials.