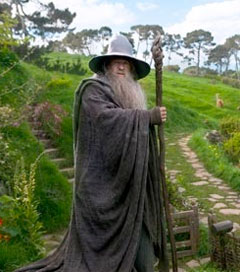 After more than two years, Peter Jackson has finished filming the final installment of The Hobbit trilogy. With the final scenes shot on 26 July, the award-winning director wrote on his Facebook page that he would try and blog throughout the day to give people a feel for what happened on an average day: “We’re shooting scenes for Film 3 today. Stuff you will see in Dec 2014, so I’m going to try and make this honest, but spoiler free. “I’ve been lying here in pitch darkness, watching fight rehearsals over and over again … I’m looking at the fights, figuring out the angles I’ll need to film them today. A huge amount to do, and it needs to get done. Our shoot day starts at 8.30am, and is supposed to finish at 7.30pm. I suspect we’ll be working late. Whenever we work a long day, I joke with the crew that I’m just softening them up for when Jim Cameron shows up in Wellington to shoot Avatar 2 and 3. Well … it’s not really a joke.” Post-production work will continue on the movies, and the second installment of the trilogy, The Hobbit: The Desolation of Smaug, opens in December. The final installment, There and Back Again, will be released a year later. Tourism New Zealand has thrown nearly all of its $65m budget at advertising based on The Hobbit, and says the movie played a part in 8.5 per cent of all visitor arrivals.

Tags: Facebook  Jim Cameron  Peter Jackson  Telegraph (The)  The Hobbit: The Desolation of Smaug  There and Back Again  Tourism New Zealand