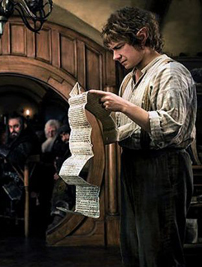 Oscar-winning filmmaker Peter Jackson says there is “simply nobody else” who could star as Bilbo Baggins in The Hobbit epic but British actor Martin Freeman. “He is fantastic and there is simply nobody else for the job,” Jackson said during a recent break from the production in New Zealand and a whirlwind trip to Southern California. “We couldn’t find anyone who was better than him. He is simply fantastic.” “He’s Bilbo-esque,” the filmmaker said. “You might not always want to say that about you, right? But seriously he has the essential features of this little English gent, this country gent who is slightly old-fashioned and has to go around in the world and try to cope with it.” The Hobbit will be told over two films, the first reaching theatres in December 212 and the second in December 213.