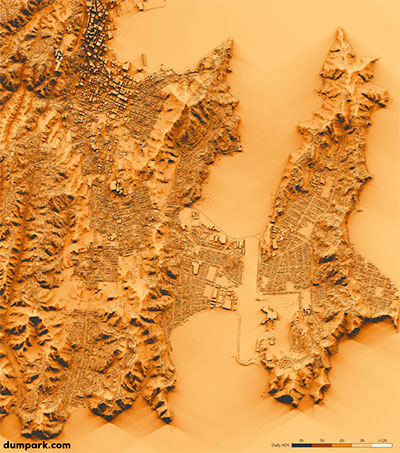 Wellington gets more than 2000 hours of sunshine each year and though it is no Los Angeles, which receives more than 3000 hours, according to the Atlantic that’s a substantial amount of sun. This illuminating interactive map, designed by data visualisation group Dumpark, tracks the capitals rays.

The agency, based in downtown Wellington, has created an interactive map that shows how much daily sunlight the New Zealand capital actually receives. Users can zoom in and out of different parts of the city, and also see changes in sunlight at different times of the day.

The interactive map is the result of Dumpark’s Laurent Lebreton and Timo Franz, and colleagues crunching publicly available sunlight data for a whole year.

The developers explain some of the map’s revelations: “The data clearly shows how very little sun the business district streets receive in a day and highlight which buildings and residential neighborhoods receive the largest amount of sunlight.”

The map isn’t just for those who want to know whether or not they’ll need sunglasses. It can be useful for people working in real estate, road safety, solar energy, agriculture, and hospitality, the developers write. For now, only Wellington is on the map. But the developers are planning to add more cities to the list, so it might be your city’s turn next to bask in the sun.