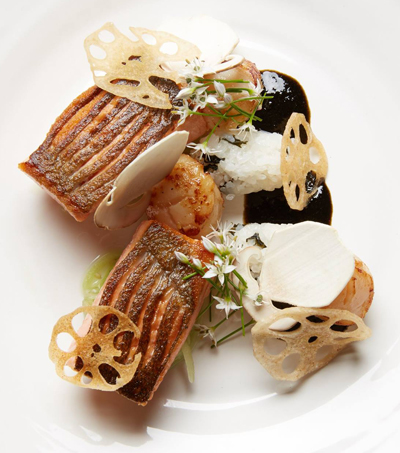 “On the South Island of New Zealand, just about anything grows—and a group of inspired chefs and winemakers are turning the fruit of the land into a distinctive national cuisine,” writes Kevin West for Travel and Leisure. On his trip to New Zealand, West explored the cuisine and scenery on New Zealand’s South Island.

When he arrived at Annandale, a 4,000-acre sheep and cattle farm turned luxury lodge on the Banks Peninsula, “the light had turned rich and golden, and the twin newborn lambs dozing 0n the gravel road glowed like movie idols.” Outside the Shepherd’s Cottage, one of Annandale’s four properties, West watched “how the raw land dropped with tectonic grandeur into the ocean’s void.”

Callum Farnell, Annandale’s director of hospitality, stocked the cottage fridge with “the fixings for a three-course dinner: seared scallops on an herb salad garnished with edible flowers, a braised saddle of farm-raised beef with roasted root vegetables from the garden, chocolate mousse” along with a card giving instructions on how to assemble and heat the food. Then West was “left alone for an evening of fireside rusticity and Spotify.”

“What we market is the history and romance of being in the middle of a working farm. It’s the quintessential New Zealand farm experience. But I tell people that it’s rustic and definitely not for everyone,” said Farnell.

“However,” West writes, it was “definitely for me.”

“Annandale’s simple, honest, and intensely local meals perfectly set the tone for a weeklong trip to investigate the distinctive food culture that has taken root on the South Island, New Zealand’s larger, less tropical, and less populous portion,” he said.

West’s route took him south from Christchurch to Queenstown in the Southern Alps, “through a world of dramatic scenery, past multiple vineyards, olive groves, stone-fruit orchards, and a grazing hinterland that supplies much of the country’s world-famous lamb and venison.”

He describes New Zealand’s food and wine culture as vibrant and “at once deeply rooted and globally attuned—and unexpectedly provided a glimpse of how the country has been shaped equally by its isolation and its transoceanic ties.”

“Modern Kiwi cuisine builds on 19th-century Anglo-Irish cookery and enlarges the traditional pantry with ingredients from Europe (olive oil, truffles, saffron), Asia (coconut milk and lemongrass), and even Latin America (chilies and avocados), much of which the country now grows itself,” writes West.

On his trip he also stopped at several other restaurants and wineries.