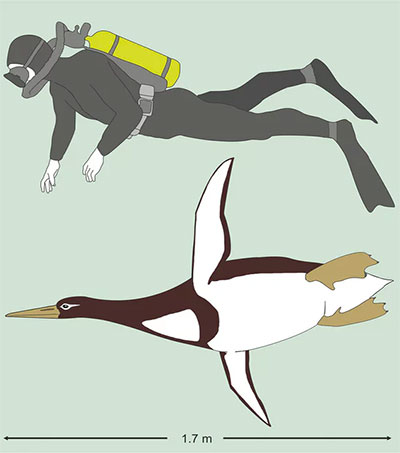 Remnants of a 1.77-metre-tall penguin who walked on earth 55m to 60m years ago have been found south of Christchurch on what is now Hampden Beach.

Measurements of the partial skeleton show that the flightless bird weighed about 100kg and had a body length of 1.77 metres, equal to the average height of an American man. Emperor penguins, the tallest penguin species alive today, reach only 1.2 metres when fully grown.

Penguins evolved from flying birds tens of millions of years ago, but lost the ability to get airborne and became accomplished swimmers instead. Once grounded, some penguin species became much larger, growing from about 80cm tall to twice the size.

The pieces of the latest skeleton, including wing, spine, breast and leg bones, were first discovered more than a decade ago, but the rock holding the fossilised bones was so hard that it has taken until now for researchers to prepare and study the remains.

Rather than the usual black-and-white colouring, the ancient penguin was probably brownish and had a longer beak than its modern-day cousins. “It would most likely have been slimmer too and not so cute looking,” said Gerald Mayr at the Senckenberg Research Institute and Natural History Museum in Frankfurt. “It’s one of the tallest penguins that has ever been found.”

Researchers named the new species Kumimanu biceae, after the Maori words “kumi”, meaning a large mythological monster, and “manu” for bird. The second part of the name honours Beatrice Tennyson, known as “Bice”, the mother of Alan Tennyson, a senior researcher on the team.