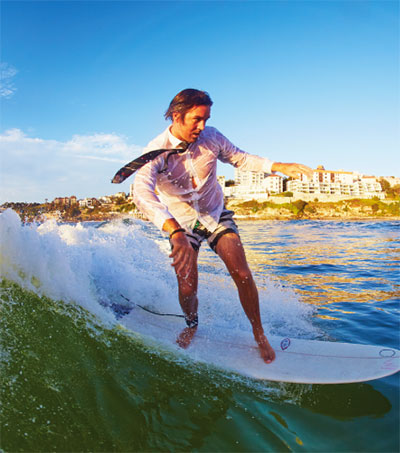 The idea is that surfers come together, dressed in fluro, to share their stories and enjoy the soothing effects of surfing.

“I thought [about how] fluro makes people happy, but it also makes an invisible issue visible,” Trebilco says. “It gets people asking questions about mental health.”

Trebilco and his friend Sam Schumacher, a surfing instructor who studied aerospace engineering, have helped build Fluro Friday into a global phenomenon that has spread to more than 100 beaches in over 20 countries.

Trebilco says his 10 days in a Manly Hospital mental health ward – the worst experience of his life – inspired the idea.

“I was just angry at the world,” he says. “But it was in there that I started to think – shit – well at least I know I’ve got bipolar. At least I don’t have to hide it any more.”

Trebilco is now an in-demand speaker, spreading the word at schools and corporate workplaces including Westpac, LinkedIn and RedBalloon.

Trebilco, who hasn’t missed a single Fluro Friday in four years, says he probably would “have been screwed without surfing”.

“But once you get out there … it’s like the saltwater just rinses off all the bad vibes and it makes everything that little bit easier.”