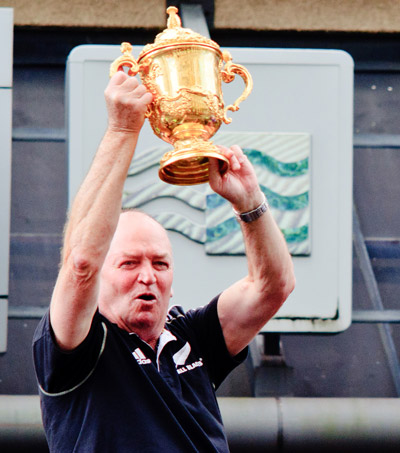 On 23 October 2011, the New Zealand All Blacks won the Rugby World Cup Final against France 8 to 7. It was “culmination of a 37-year career’” for Graham Henry – one of the most iconic coaches in rugby history.

“When I was coaching the All Blacks I was probably the most experienced coach in the world. That’s not an arrogant statement, it’s a fact,” said Henry, who has coached a range of different teams both inside and out of New Zealand.

Graham Henry has shared the lessons he learned in his coaching career with the Guardian.

Graham Henry learned early on that his team had to move away from the macho culture after players were spotted drinking.

Together with his assistants, Steve Hansen and Wayne Smith, as well as two senior players, Henry drew up a new set of rules.

In 2005 after a talk with All Blacks captain Tana Umaga, Henry also learned that the team talks he had been giving for the past 30 years somehow did not work for the players.

“You spend the week before each game building the momentum of the group. As you do that, you transfer the responsibility from the coaches to the players but then an hour before the game, there is a fella up the front telling them what to do. I realised it just didn’t fit,” said Henry.

In order to empower the players, the coaches “identified a group of seven senior players who they wanted to take ownership of the team.”

“The more empowered players are, the better they play,” said Henry.

Henry highlights how important it is to have something that will make a difference. In 2008 and in the 2011 World Cup final the All Blacks ‘Teabag’ move made that difference.

The Kiwi coach emphasizes the importance of psychology and mental strength.

“You do see the All Blacks win matches they probably shouldn’t, because the players have got the mental skills.”

“In 2010-11, Henry had been heavily criticised for rotating his players” as some people felt Henry was giving away All Blacks caps to easily. But for him it was a crucial part of the strategy.

“If (Stephen Donald) hadn’t had that All Black experience, he wouldn’t have been able to do what he did in the World Cup final,” after Dan Carter and Colin Slade got injured, said Henry.