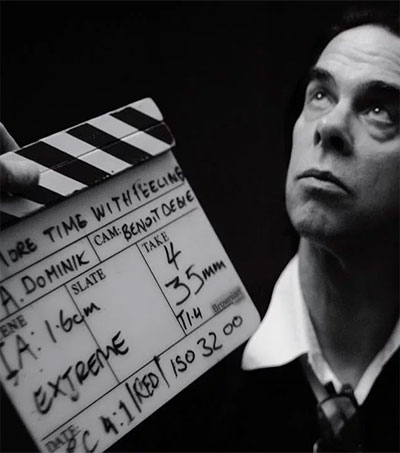 New Zealand-born director Andrew Dominik said he made the Nick Cave documentary One More Time With Feeling, expecting viewers to see it only once, and not many viewers at that.

The new album by Nick Cave & the Bad Seeds stems from a tragic event the Australian singer-songwriter will likely never stop experiencing. On 14 July 2015, Cave’s 15-year-old son Arthur died after falling from a cliff near the family’s home in Brighton, England, while under the influence of LSD.

Permanence wasn’t what filmmaker Dominik, 48, had in mind for One More Time With Feeling, a remarkable 3D black-and-white documentary about the creation of Skeleton Tree that premiered at the Venice Film Festival and played in theatres around the world on the night of 8 September, hours before Cave’s album was released.

“It wasn’t made for history, or for a wide audience,” Dominik explained. “I made it specifically for Nick Cave fans to see [that] night.”

The director laughed when asked if that plan was out of step with traditional Hollywood marketing.

“Well, it’s certainly perverse to make a one-time-only movie,” he said. “I found that appealing.”

That attraction to perversity helps explain Dominik’s bond with Cave, a longtime friend whom he hired along with another Bad Seed, Warren Ellis, to score his Oscar-nominated 2007 picture, The Assassination of Jesse James by the Coward Robert Ford.

One More Time With Feeling – which Cave funded himself as a way to avoid having to do painful interviews about Skeleton Tree – is a deeply moving portrait of how grief can shake the ground beneath even the sturdiest of people.

Much of the immersive quality of One More Time With Feeling is driven by Dominik’s inventive use of 3D. It’s a technology, he said, that is mostly misapplied in hectic, fast-paced “fantasy films and children’s movies with a thousand cuts.”

Asked if he was surprised by Cave’s willingness to display such vulnerability – and so soon after Arthur’s death – Dominik said his friend looked at the album and the film as “a one-foot-in-front-of-the-other-type thing.”

“He can stay in the house and feel sad, or he can get on with things. It’s not like they’re dealing with the grief in a way where they’re trying to avoid it, trying to jump over it.

“But life goes on. I think it’s an attempt to live.”