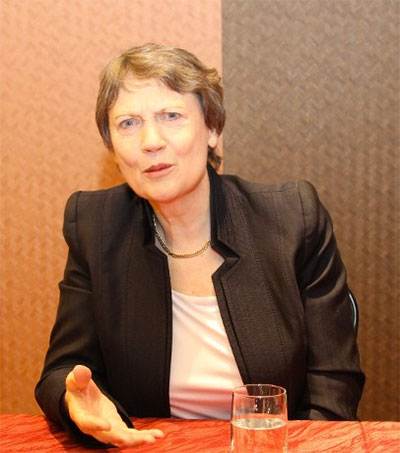 Clark, who was the premier from 1999 to 2008 and then headed the United Nations Development Programme (UNDP) as the first woman for eight years until 2017, said the high level of gender equality in her home country was achieved in part because “women have fought for it and have been fighting ever since the late 19th century” when New Zealand became the first country in the world where women gained the right to vote in 1893.

“The European society in New Zealand was a new society. It came from an old world to a new one and we were creating a new society so it didn’t bring a lot of baggage with it,” Clark explained. But Japan, she observed, “is a very old culture with traditions.”

Clark, 68, said changing workplace culture is vital in fighting sexual and other forms of harassment and gender discrimination. “We need public and private sector workplaces to lead on us to say zero tolerance of harassment and bullying, [and implement] gender sensitivity in the way in which we recruit … promote, mentor and support.”

Sending a message from the top is important, the former prime minister emphasized. “These things shouldn’t be dismissed as inconsequential. Through your human resources policies in companies and public service you can make it very clear how you expect people to be treated.” She added that making clear that violations will receive sanctions such as expulsion, demotion or salary reduction is vital too. “We won’t tolerate, we will take action,” is the kind of stance management must take, according to Clark.