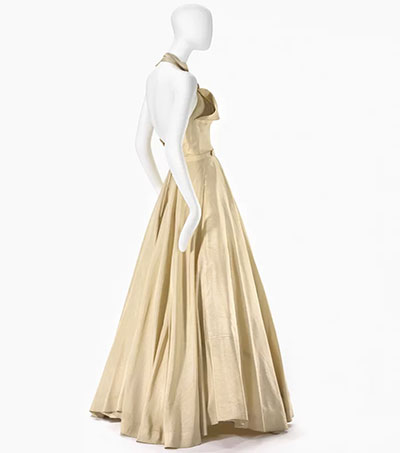 A 1953 evening gown designed by Otahuhu-born Clarence Hall Ludlow is on display in the 200 Years of Australian Fashion exhibition, included as part of the Melbourne Fashion festival.

Hall Ludlow was one of Australia’s earliest and most important couturiers. His salon, at the “Paris end” of Melbourne’s Collins Street, reached its peak in the 1950s and 60s. He won the prestigious Gown of the Year award in 1953.

Hall Ludlow “was one of the few who were less imitative, and more about artistic vision. He was meticulous, with a very strong and clear vision in that era of ball gowns and cocktail dresses; part of that movement of strong sculptural, architectural line,” according to curator of fashion and textiles Danielle Whitfield, the National Gallery of Victoria (NGV).

Hall Ludlow died in 2003. In a Sydney Morning Herald obituary, Diane Masters, a leading Melbourne mannequin in the 1950s, wrote: “He was the pet of the Melbourne jet set, popular with theatricals and admired by the great fashion photographers of the day: Athol Shmith, Helmut Newton and Bruno Benini. His salon was the epitome of style and sophistication and he staged wonderful parades and parties there, attended by wealthy clients, socialites, famous models and celebrities of the day.”

Over 120 works from more than ninety designers are presented in this exhibition – the first major survey of Australian fashion to be undertaken in the country.

200 Years of Australian Fashion is on at the NGV until 31 July.