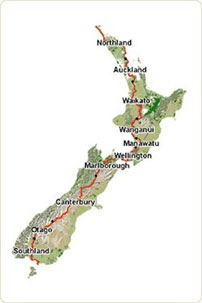 From Top To Bottom

The 3000km Te Araroa, or The Long Pathway, the world’s longest walking trail, will be officially opened on 3 December in Wellington. The trail is the result of a massive volunteer effort that has come together over the past 17 years. The trail essentially runs the entire length of both the North and South Islands, and is made up of about 300 sections that vary in length from a few hours to a few days. Now that it is finished, and preparing to officially open, long distance trampers are no doubt already preparing to walk its length. It is estimated that it will take roughly 4 months to walk it from end-to-end.