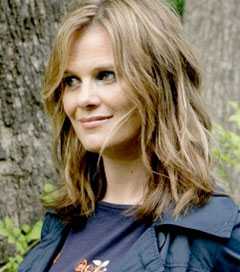 From One South to Another

Formerly of Gore, singer-songwriter Jackie Bristow, who has been based in the United States for the past eight years, recently performed two shows at the Neutral Ground Coffeehouse and House of Blues in New Orleans. Bristow often composes her songs using the open tuning for guitar that she learned from producer-bassist Larry Klein, ex-husband of another of her influences, Joni Mitchell. “I’ve wanted to go to New Orleans for so long,” Bristow said. “I’ve heard so many great things about it.”

Klein produced some songs for Bristow’s debut album, 2002’s Thirsty, which was recorded for Australian label Mushroom Records. Bristow comes from the home of the annual Gold Guitar Awards and grew up with American country music. Bristow took up ukulele and guitar at her Catholic school when she was eight. She learned songs by Willie Nelson, Dolly Parton and other country artists so she could appear at New Zealand’s country music festivals and competitions. But country music ultimately wasn’t her calling. She enjoyed the music of Crowded House and such artists as Cyndi Lauper, Rickie Lee Jones, Shawn Colvin, Neil Young and Bonnie Raitt. Bristow’s third album, Freedom, is out now.