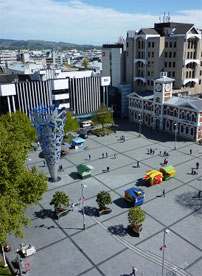 Onward To The Future

“In [Christchurch] the big picture is bigger than the destruction,” SF Gate reporter Spud Hilton writes. “I had come to Christchurch to better understand how a series of quakes can turn a metropolis upside down, to experience the city’s features and attractions that were largely unscathed, and to possibly catch an early glimpse of the next evolution as New Zealand’s second largest city rebuilds, rethinks and reinvents. As with New Orleans following Katrina, I couldn’t help but wonder how the nature of Christchurch — often considered the most British city outside of England — will change in its rebirth.”