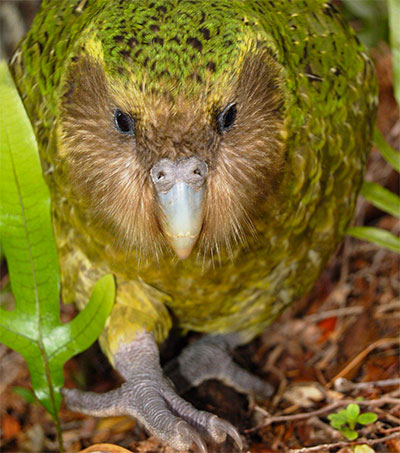 Sirocco, New Zealand’s superstar kakapo, is alive and well in Fiordland, according to the Department of Conservation. The conservation ‘spokesbird’ shot to fame after he got a bit too friendly with a zoologist filming for the 2009 BBC documentary series Last Chance to See.

The near 21-year-old kakapo, a vulnerable species of parrot native to New Zealand, appeared unharmed and unfazed after his two-year hiatus from the public eye.

Sirocco had been sorely missed by rangers in Fiordland’s wilderness, who nevertheless suspected he was still alive, after his transmitter failed but did not send a mortality signal.

“While we’ve been out to search for him a few times, we were confident he’d be perfectly happy out there in the wild in his predator-free home,” Kakapo Operations manager Deidre Vercoe said.

Sirocco has been around humans since he was a chick, after needing extensive treatment for a respiratory illness. Kakapo are known to be affectionate and playful.

Kakapo, who are unable to fly, but can inflate themselves with air to become the size of a football, are one of New Zealand’s most vulnerable birds, with only 150 birds surviving on the country’s remote islands.