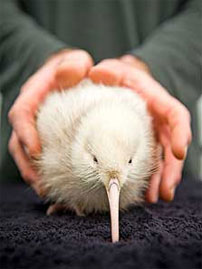 An expectant silence hangs over the Pukaha Mount Bruce National Wildlife Sanctuary as hundreds of spectators await a glimpse of a rare white kiwi, a bird held sacred by Maori, describes The Australian. “A collective sigh follows his unveiling to the crowd … Resembling a fluffy white tennis ball with an elongated beak and stout, three-toed feet, the white kiwi has become a symbol of New Zealand’s efforts to prevent its emblematic national bird from becoming extinct. Pukaha’s field centre manager Kathy Houkamau said the chick had sparked unprecedented interest in the programme to save the flightless bird species, which is threatened by introduced predators such as stoats, rats and ferrets. ‘Manukura is proving to be a strong advocate for kiwi because he’s so rare and people are really interested in him, he’s drawing people to Pukaha and also to the species generally,’ she said.”