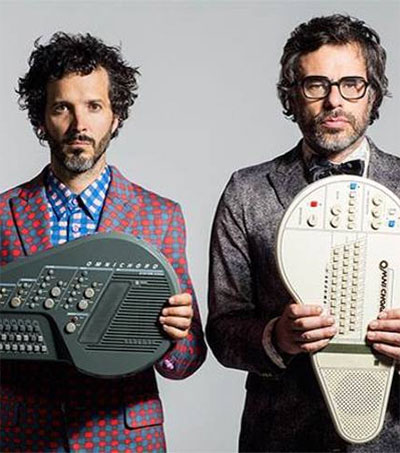 The tour will feature stops in London, Birmingham, Manchester, Dublin, Glasgow, Leeds, Liverpool and more, kicking off with two nights at London’s Eventim Apollo on 19 March.

The two New Zealanders were university flatmates before they created Flight of the Conchords in 1998, first performing as part of a five-man sketch troupe called So You’re a Man, which also included Thor: Ragnarok director Taika Waititi, performing across New Zealand and Australia.

After the group broke up, the Flight of the Conchords found individual success at the Edinburgh Fringe Festival in 2002 and 2003, where they were nominated for the Perrier Award; US success was boosted by performances on the Late Show with David Letterman and Late Night with Conan O’Brien.

The first season of their HBO television series of the same name premiered in 2007, swiftly followed by a second season in 2009.

“McKenzie and Clement are a perfect encapsulation of an ever-burgeoning movement of quirky, lo-fi comedy. They’re outsiders of the most loveable sort, a perfect product of New Zealand’s unique sense of humour – a dry self-deprecation that plays on that perpetual perception as the harmless underdogs.

“Also, Flight of the Conchords are, quite simply, one of the few musical comedy acts that actually manage to produce songs that are catchy and fun even without the jokes, whether they’re drawing influence from David Bowie or Serge Gainsbourg.”

McKenzie, 41, won an Academy Award for his song Man or Muppet, penned for 2011’s The Muppets.

Clement, 43, has flourished in voice work, with roles in Despicable Me, Rio, Moana and The LEGO Batman Movie. He also co-directed What We Do in the Shadows alongside Taika Waititi.