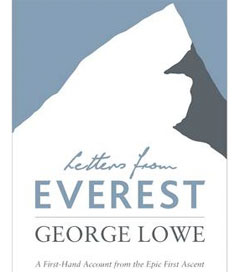 Sixty years after Hillary and Tenzing reached Everest’s summit, a number of new books dissect the events of 1953, including two books by New Zealander George Lowe, who died in March aged 89, the last survivor of the British Mount Everest Expedition. “Letters from Everest: A First-Hand Account from the Epic First Ascent, by George Lowe, collects his correspondence with his sister Betty back home in New Zealand and offers a poignant, funny, beautifully written glimpse into that fabled expedition,” Carl Wilkinson writes for The Financial Times. “It is the uninterrupted and authentic voice of Lowe, often having to thaw his ink before putting pen to paper, that is so moving.” The Conquest of Everest: Original Photographs from the Legendary First Ascent, by George Lowe and Huw Lewis-Jones is also out now.