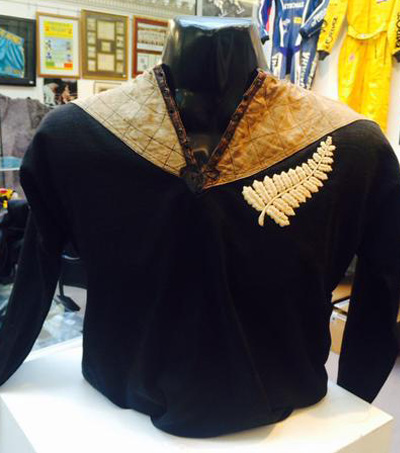 One of the shirts that earned the All Blacks their legendary name has been sold for £22,000 at Sotheby’s in Britain by rugby club Mumbles RFC.

The shirt, which was slightly frayed at the back and missing a lace had been worn when New Zealand played Swansea RFC on December 30, 1905 and is one of nine of the All Blacks’ Originals jerseys in existence from 1905.

“They started the bidding at £13,500 and it was over in a few seconds. It turned out it was a world record for a rugby shirt”, said Martin Rodwell, Mumbles RFC’s chairman.

Today known as The All Blacks, the team started their first tour outside of Australia in 1905 as the Colonials. Early on they became known throughout Britain as the All Blacks because of their distinctive shirts, shorts and socks.

The new name quickly became popular throughout Britain and the 1905 team has since become known as The Originals for starting the All Blacks legend.

The New Zealand rugby team rapidly made a name for themselves after defeating Devonshire 55-4 in their first game, prior to which nobody thought of the team to be exceptional.

“The New Zealanders are the men of the moment. Their visit has shaken up the dry bones of Rugby Football and created a revival in the game that will be felt for years to come”, wrote the Limerick Leader after the team had played Munster.

In total they scored 976 points and conceded only 59, which set the standard for all subsequent All Black sides.