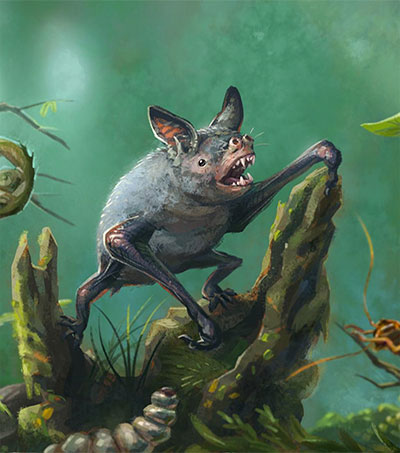 The fossils of a massive bat have been discovered near the historic mining town of St Bathans in Central Otago. The 16- to 19-million-year-old bat’s body mass was just 40g, but its teeth and bones were three times the size of today’s average bat.

The creatures are quite peculiar, according to researchers, who say the bat once flew and scurried about on all fours, foraging for food beneath leaves and tree branches in the forest. It roamed through forests and ferns around the prehistoric Lake Manuherikia, which once made up the Maniototo region in the South Island.

Vulcanops jennyworthyae, as it’s scientifically known, is the largest known species of all burrowing bats. Its namesake is from Jenny Worthy, a team member who found the fossils, and Vulcan, a mythological Roman god of fire and volcanoes and also a reference to a historic hotel in St Bathans near where the fossil was discovered.

This genus, Vulcanops, is the first to be added to New Zealand’s list of bats in 150 years.

“Burrowing bats are more closely related to bats living in South America than to others in the southwest Pacific,” Sue Hand, the study’s lead author and paleontologist from the University of New South Wales in Sydney, said.

New Zealand’s iconic surviving species from this prehistoric time period, like tuatara, moa and kiwi, evolved alongside various animals such as these bats, land turtles and crocodiles. They “evolved in a far more complex community” than previously understood, Paul Scofield, co-author and senior curator of natural history at the Canterbury Museum, said.

The ancient bat once ate insects, spiders and weta. The size of its specialised teeth indicates that the bat ate plant food as well as small vertebrates, more similar to the diet of South American burrowing bats. That diet is not seen in today’s Australasian bats.

The cooling and drying trends millions of years ago resulted in an overall decline in New Zealand’s bat diversity. Two bat species make up the country’s entire list of native land mammals – others were introduced by humans. The fossilised bat is another discovery that uncovers the vast history of the prehistoric supercontinent Gondwana.