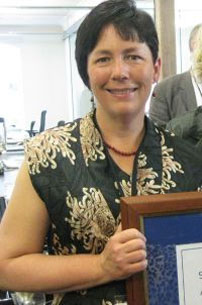 Otago University expert on the works of English playwright William Shakespeare Professor Evelyn Tribble has criticised the film Anonymous — which questions the bard’s authorship of his attributed plays — calling it Hollywood “libel.” Tribble said the star-studded film, which attributes Shakespeare’s works to Edward de Vere, the Earl of Oxford, was an implausible conspiracy theory.Anonymous is being promoted with the poster line “Was Shakespeare a fraud?” Tribble, the author of four books and a series of Shakespeare-related articles in publications around the world, said the assumption of a hidden hand in the bard’s work was “patently false.” “The simple fact is that in the tight-knit gossipy community of theatrical professionals, Shakespeare’s authorship was absolutely undisputed,” Tribble said.