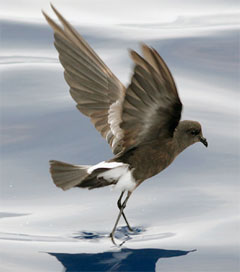 For the first time, New Zealand scientists say they have found an egg on Little Barrier Island of an endangered bird that had been presumed extinct for more than a century.

The storm petrel is a sparrow-sized bird that spends most of its life at sea, and before its rediscovery in 2003 had been thought to be extinct for more than a century.

Scientists took the opportunity when the female was off the nest to check the egg, determining it was fertile and expected to hatch in April, the Department of Conservation said.

“It was exciting to see the egg of a bird once thought to be extinct,” the department’s principle science adviser Graeme Taylor said.

“The fact it has taken until 2014 for scientists to observe one of these tiny eggs reflects how much we still don’t know about New Zealand’s natural environment and particularly for marine species,” Taylor said.