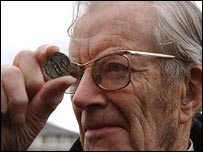 The science world – and the Edge community – lost one of its brightest stars with the death of Maurice Wilkins on October 5. Born in NZ in 1916, Wilkins was awarded the Nobel Prize in 1962 for the pivotal role he played in the discovery of DNA. Colleague and fellow Laureate James Watson: “Wilkins was a very intelligent scientist with a very deep personal concern that science be used to benefit society. This started in his early days, when he witnessed the atrocities of war, and continued through his life. He will be sorely missed.” Tributes from all over the world praised Wilkins’ compassionate and self-effacing nature, as well as his inspiring intellectual legacy. Obituaries appeared in almost every major publication, including the LA Times, Guardian, Nature,and the Telegraph. Read Wilkins’ NZ Edge Hero biography here.