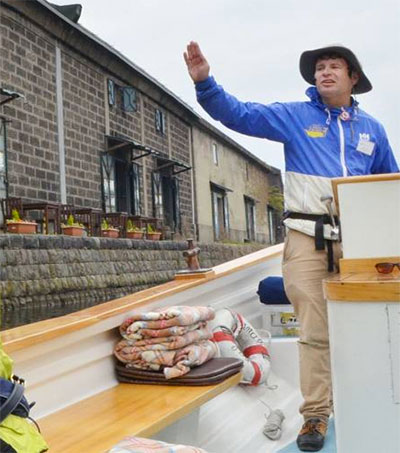 Canal tours led by 35-year-old New Zealander Brad McIvor along the Otaru Canal are one of Hokkaido city’s most popular tourist attractions, according to the Japan Times.

Of the seven skippers working for Otaru Canal Cruise, McIvor is the only foreign national. The tours take about 80,000 visitors each year on a 40-minute boat ride through the city’s historic area, with its retro warehouses and gas lights.

“Some passengers are apparently surprised, swinging their heads back to look at me,” McIvor says when he introduces trivia of the city in fluent Japanese while navigating the boat from the stern.

McIvor hails from Dunedin. He studied Japanese at high school, a language he found “intriguing.”

After graduating from high school, he studied in Chiba Prefecture for 11 months. This was his first visit to Japan. McIvor earned bachelor’s degrees in both Japanese language and geology at the University of Otago.

McIvor moved to Hokkaido in 2007 and worked at a ski resort in Akaigawa, where he heard about the canal cruise in neighboring Otaru.

“I thought it would be fun,” he said.

He started working as a guide in spring 2012, obtained a second-level small boat navigation license in February the following year and became the first foreign captain in 2014.

McIvor said Otaru, with its old buildings and many slopes, resembles his hometown in New Zealand. “I don’t feel like I am in a foreign country,” he said.