NZEDGE  >  News  >  Society  >  Politics and Economics  >  Dotcom Has His Own Party, and Dance Moves 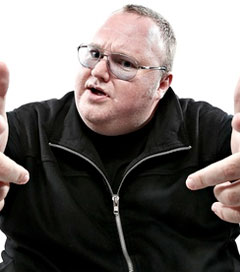 Dotcom Has His Own Party, and Dance Moves

New Zealand-based Megaupload.com entrepreneur Kim Dotcom, 40, is launching two ventures this month: a new political party to contest in the country’s next general election and a debut dance album, Good Times, to be released on his own label, Kimpire Music.

The Guardian’s Duncan Grieve meets “I’m-not-a-pirate-I’m-an-innovator”-Dotcom at his Auckland mansion.

Greive mentions his political ambitions, and Dotcom lays out his vision. “‘I want to create tech jobs, by creating the right environment for companies to come here and establish a presence in New Zealand,’ Dotcom says. ‘Meaning the right legislation – safe harbour laws. Laws unlike the US, where you have to install backdoors if the government asks you, and you can’t do anything about it. You can’t even tell anyone about it.’

“Dotcom is not just passing through New Zealand. He’s become a major public figure here, and not just of fun. His opinions and his party are being taken seriously. He loves this land not just for its clean air and greenery, but for being remote enough to feel safe. ‘New Zealand is not on any nuclear target list. It’s the perfect place to survive a global crisis.’ He is certain there’s a major international conflict looming.

“He says making [Good Times] helped him relate to his future partners in music distribution service Baboom. ‘I wanted to know what an artist goes through. How it affects them, what kind of obstacles they have to overcome. Because I wanted to create the best tools for them.’”