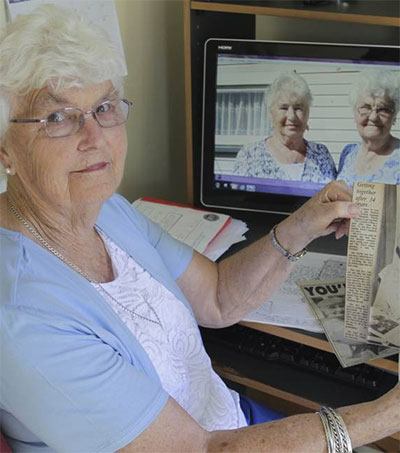 After thousands of air miles, reams of paper and a lifetime of stories, Oxfordshire woman Barbara Finch is marking seven decades of writing to her pen pal Elizabeth Martin, 84, (pictured) on the other side of the world in Hastings, New Zealand.

Finch wrote her first letter to Martin in November 1947 whilst a high school student Abingdon. An exchange teacher had put the girls in touch via the Women’s Weekly magazine when she returned home to New Zealand.

At that time it would take several weeks for letters to reach each other but the girls, both 14 at the time, struck up a friendship over their favourite magazines and film stars that has continued ever since.

The women have kept in touch as letters turned to emails, boyfriends turned to husbands, and children, grandchildren and then great-grandchildren were born, despite always living on separate continents.

For Finch, the friendship has been especially meaningful over the last two decades during which time her husband Joe and son Paul both died.

She said: “Through the happy times and the sad times, we’ve always talked. Her family has become a second family to me.

“She says I am the sister she never had.”

Speaking to the Hawke’s Bay Today newspaper, Martin said: “Seventy years is a long time and such a lot has happened.

“We both lost our husbands, I’ve lost a daughter, she lost a son. With things like that, her friendship means a lot to me.”