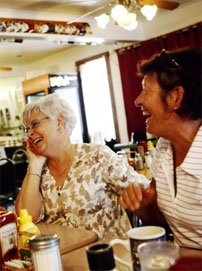 Aucklander Donna Thompson (right) has been writing to Wyoming woman Peg Scott since she was 12-years-old. The pen pals finally met 46 years later over breakfast at Sherrie’s Place in Casper, Wyoming. At school in the mid-1960s, Scott was learning to write letters, address envelopes by corresponding with a pen pal. “I was fortunate enough to choose someone from New Zealand,” Scott said. In her first letter to Thompson, Scott introduced herself, said she was “5-feet-whatever” tall and described Wyoming and Casper. She closed with “’I really hope you answer me,’” she said. “And she did.” While they share a lot in common, they noted differences between the Thompson’s nation and Scott’s state. “We have lots of beaches,” Thompson said. “Everything in America is pretty big.”