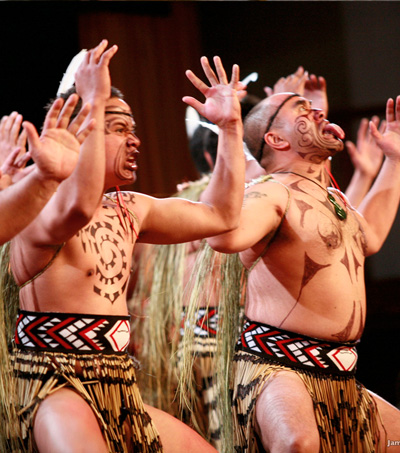 After a Vienna waltz class in 2013 and dancing with Cretans in a “giant spinning circle of locked arms”, Christine Negroni travelled to India, Ethiopia and New Zealand to connect with locals through dance.

Her travel experience was featured in the New York Times.

After attending New Zealand’s Matariki festival in 2012, Negroni was fascinated with New Zealand’s haka – a “dance that is often intended to intimidate spectators with its fierce movements” and the less well-known poi, a way of swinging balls in complex circles on strings of various lengths.

The Maori family Negroni was staying with, advised her to visit Whakarewarewa in Rotorua, a historic center of Maori culture where visitors can watch daily dance performances.

“Haka was used as an act of defiance. You had to be defiant. Your whole body, eyes and tongue are used just to frighten them,” said Terehira Mokena, a professional dancer and leader of the group.

“To scare the enemy away you had to portray yourself as an evil person.”

Negroni was not called onto stage to try her luck in an impromptu class. But a clerk in the Whakarewarewa Thermal Village souvenir shop offered to show her the first steps of poi.

“It took considerable concentration for me to keep the balls at just the right speed without having them smack into each other or fly off into space. My clumsy attempts looked nothing like the delicate representation of the flight of birds and butterflies that punctuate the stories of nature and tribal life told in the Maori dances,” writes Negroni.

“I prefer to believe, as Ms. Mokena had suggested, that Maori dancing is best left for the descendants of New Zealand’s first settlers to perform and for visitors like me to observe and enjoy”.